Getting Lost In The Jungle 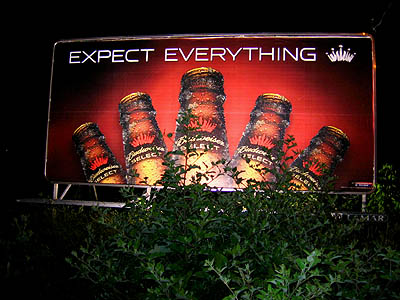 See this billboard? The Budweiser beer company paid an advertising company mucho bucks to come up with an eye-catching, perfectly composed image. I wonder if Budweiser thinks its ad dollars were well spent with this spot, jungle plants growing bigger and taller, blocking the view.

But with all the rainy weather, parts of Plattsburgh are being reclaimed by nature. Hedges, vines, weeds –- all laughing because no one has been around with trimmers or whackers.

Give the location depicted above another couple of months and passers-by will say, “Gee, I thought I used to see a billboard over there. And wasn’t there a sidewalk, too?”
Posted by Luke T. Bush at 3:45 AM