Not All Thumbs – Flag Spoon

I attended a Polish banquet sponsored by the local arts center, once again volunteering my photographic semi-expertise. The banquet was part of the center’s ethnic theme night series. Of course, appropriate flags hung from the wall. 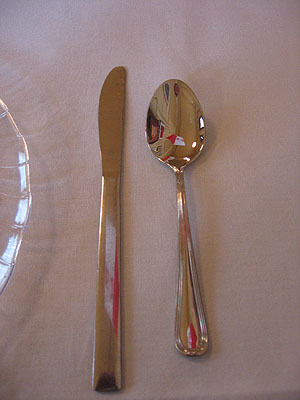 I noticed that the spoon at my setting made an interesting curved mirror, reflecting the Polish flag hanging near the table. So I carefully composed with my compact digital camera and took a shot, planning to move in closer with succeeding images. Depth of field – the area that is in focus – becomes very shallow when shooting close up with relatively low light. The only light in the room came from chandeliers way up on the ceiling and the windows across the room. It was overcast outside, evening time, so the sunlight wasn’t that strong. 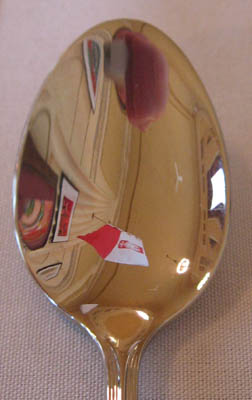 I moved in closer. Besides a shallow depth of field, the other factor was that the tiniest movement could blur the image. When working so close, the greater magnification can make an almost imperceptible shake obvious. I had to make sure the table was stable – and that I wasn’t shaking the camera when I squeezed off the shot. I’m not that steady handholding a camera. While I did achieve a fairly sharp shot, part of my hand and the camera appeared in the spoon as a weird blob.

With the small screen on the camera, the shot looked OK, but after I transferred the file to my computer and checked it on the screen, there was a damn thumblike blob. But as I’ve mentioned before, I usually take extra shots to increase the odds that I've nailed the image. 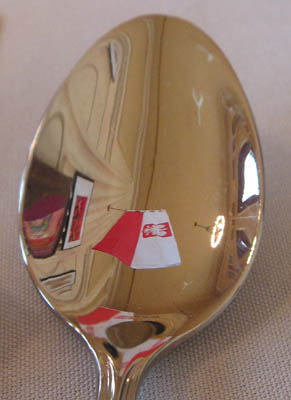 I had two more shots I had taken later, using a different angle. As you can see, I kept that distracting shape out of the image. Then again, maybe some people like weird blobs.