Getting Wise With A Not So Wide Lens 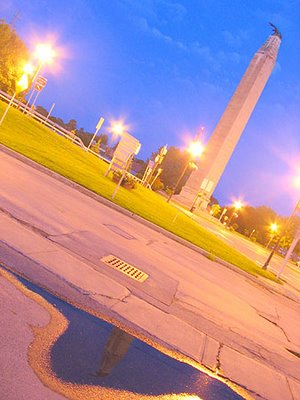 Problem: my compact digital camera at its widest end is only equivalent to a 35mm wide angle lens in the 35mm film format. It wasn’t wide enough to include the eagle on top of the monument and its reflection in the puddle, despite the vertical composition.

Of course, I could have backed up, making room for both the top of the monument and the puddle –- and end up losing the reflection which could be only be seen at one spot. What I needed was a wider lens, something equivalent to a 28mm in the 35mm film format.

So I hauled along my old Canon SLR and took a few shots with a 28mm, no problem getting both key subjects in the same frame. But until I get that film processed, I don’t know if I have nailed the shot. I did manual exposures and while I did bracket exposures, I still could be off enough so that the shot doesn’t work.

Anyway, I wanted a digital image. I have to admit that I’m spoiled by the quicker turnaround with a digital camera. Check the viewfinder; if its looks like crap, erase it. Then make a thorough check at home on my computer monitor.

Now I could run out and buy a digital camera with a wider lens –- but that would involve winning the lottery. There are lots of things I could do with a less restrictive budget. I still have film from last summer stored in my refrigerator, waiting to see the final light of day. It’ll get processed, just like the last roll I took, budget permitting.

So I make do with what I have. Last evening I made my third trip to the monument, trying to catch the juxtaposition between the eagle and its reflection just before complete nightfall. While adjusting the camera on my tripod, inspiration hit me. Screw traditional composition. Tilt the frame and make it fit the scene.

As you can see, some photographers obsess, always searching for an answer. Three trips might be excessive to you, but at least I’ve got a shot that’s a lot better than what I did before. Not perfect; just better.