Plattsburgh’s pragmatic mayor was quoted in the newspaper that citizens should help out with the problem of dogshit being left on the ground. If a citizen sees a dog-owner not picking up after his pet, stated the mayor, then the citizen should yell at the rude dog-owner.

My reaction at the time: “The way is the law is, the person doing the yelling will probably face harassment charges while the dog-owner will walk away scot-free. 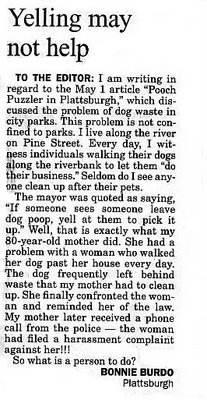 Am I psychic? No, I just know how things can work out for someone who is in the right but gets screwed for it.

Since the mayor offers such a practical solution to the problem, let me suggest a course of action just as sensible. The fictional British superspy, James Bond, has a license to kill under the authority of Her Majesty. Ordinarily killing a person is a big No-No, but it’s allowed when working for the government.

Because the mayor has stated that citizens should vocally attack inconsiderate dog-owners, a concerned citizen should be given leeway in the matter. In fact, the mayor’s proclamation in the newspaper means that he has deputized all citizens to crack down on the dogshit problem.

Just go to a local print shop and have a special ID made stating that you have a license to harass under the authority of His Honor.

But don’t blame me if a dog-owner has his pit bull chew off your leg. After all, yelling can really provoke an animal, either the two or four legged kind.
Posted by Luke T. Bush at 3:28 AM