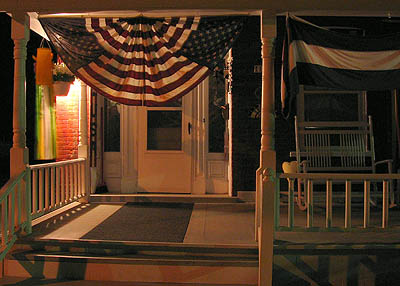 I was walking around during the night and noticed a few subjects that would make interesting images. So I went home, grabbed my digital camera and tripod.

One subject was an American flag display on someone’s front porch on main street. Something to include my Memorial Day file. I noticed no lights were on and that all the blinds were closed. I set up my camera for a time exposure, making sure not to block the sidewalk, even though there isn’t that much foot traffic after 3 AM. Since I was using available light, there would be no flash to disturb anyone in the home. It took a while to frame the shot, set the manual exposure and focus.

A city patrol car drove by. I looked over my shoulder; the car was sitting at the stoplight. I gently tripped the shutter, waiting for the long exposure to do its stuff.

I noticed something behind me. I turned around; it was the patrol car. The two officers asked me what I was doing. I explained I was just taking a photograph of the flag; I wasn’t looking into any windows. The female officer was puzzled when I said I was making a time exposure. (Then again, I’m not an expert on police tech talk and lingo.) After asking for my name and address, the officers told me to take the shot and move along before the owner could possibly call in a complaint. So I grabbed one more shot and left. 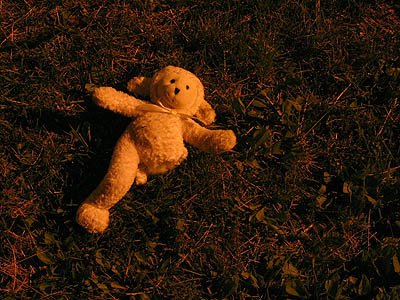 It’s a good thing the police didn’t question me on a side street where I found some stuffed toys scattered all over the sidewalk and grass. If they saw me imaging the teddy bear with the missing leg, they might have run me in for being a toy killer.
Posted by Luke T. Bush at 5:46 AM