A Leap Of Faith 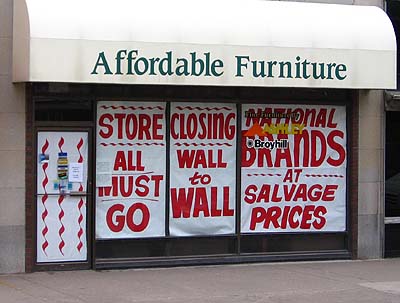 Going out of business? Then let Plattsburgh’s mayor facilitate the process.

Recently His Honor appeared in a TV ad for a downtown furniture store closing its doors. Some question if there’s a conflict of interest when a mayor ends up hawking for a private business. In response the mayor said the business was sponsoring not a regular sale, but a going-out-of-business sale, and that he wasn’t compensated.

In the commercial the mayor inferred that the closing was bringing new opportunities to downtown, the old making way for the new.

So the mayor promotes a thriving downtown by promoting the last gasp of a dying business. In fact, according to a newspaper article, he would do it for any business calling it quits.

The closing of the furniture store is the latest tearful entry on the long list of entrepreneurial dodo birds. It probably won’t be long before the mayor’s services are needed.

How far will the mayor go to get the word out about downtown Plattsburgh? One can only imagine his appearance in another TV commercial.

“Hello, I’m Plattsburgh Mayor Dan Stewart. You may be wondering why I’m standing on the edge of this rooftop with the distraught gentleman next to me. Well, I’m here to promote a special going-out-of-existence event. This poor guy is a downtown business owner screwed by the lack of customers. He’s financially ruined, considering an option to solve his problems. And if he does, his option can be your opportunity. Come on down and check out the available empty storefronts right on main street. If you’re a good businessman and can sucker –- I mean attract –- shoppers to downtown, then you won’t be pushed to the edge. You’ll be jumping for joy with cash in hand. Isn’t that right, Rolla?